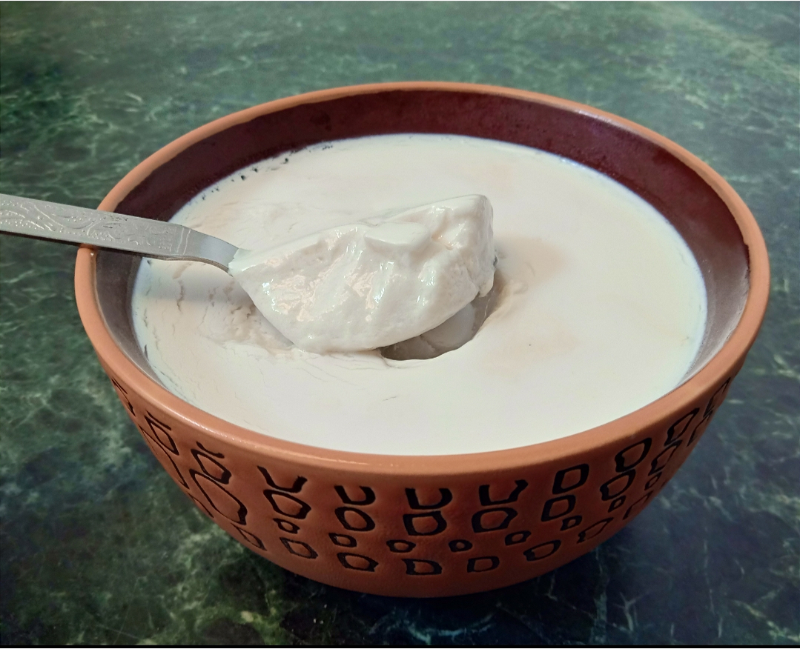 Note: I was inspired to try this combination after coming across the image of a bowl of perfectly set peanut-cashew curd while browsing through Instagram a few months ago. Unfortunately, I have since deleted my account and don’t remember the name of the lady whose post inspired me in the first place 🙁 If *you* are reading this please let me know so I can credit you!

The world of plant-based curds is so, so vast! While I had already tried a few “combos” like peanut-rice, cashew-rice, soya-cashew, and coconut-cashew curds, it would have never occurred to me by myself to marry peanuts and cashews to make yet another version of vegan curd! It’s probably one of my favourite ones at the moment! It looks exactly like the dairy curd we all grew up eating and has a pretty neutral taste. The peanut flavour is well-masked by the addition of cashews, and since we are using just a few cashews per batch, the overall cost of preparing this curd remains nominal.

And the best thing? It’s approved by my non-vegan dad who loves his dairy curd with a fierce passion. He loved the raita and kadhi made with this curd and stated that he wouldn’t have suspected it wasn’t “real curd” if he hadn’t already known. Yayy 😀

If you’re new to making vegan curd, halve the recipe. But do give it a try! You won’t regret, I promise 🙂

5+ Types of Homemade Vegan Curd! – Of Donkeys and Dhokla

Hi! I have peanut curd, can I use it as a starter for the peanut cashew milk curd?

Yes, any plant-based curd can be used as a starter.

These recipes are really a life savior! I used this recipe for the soy curd and peanut curd. Both turned out so amazing! Thank you for posting these recipes! 💙
I would also suggest people to use a mud vessel so that your curd will be very smooth and very thick. These vessels are easily available in the market when asked for “curd vessels” .

Hi Mudra 🙂 I’m so happy to know this method worked well for you! I agree with you. I often use a mud vessel to set curd and it comes out very thick and creamy.