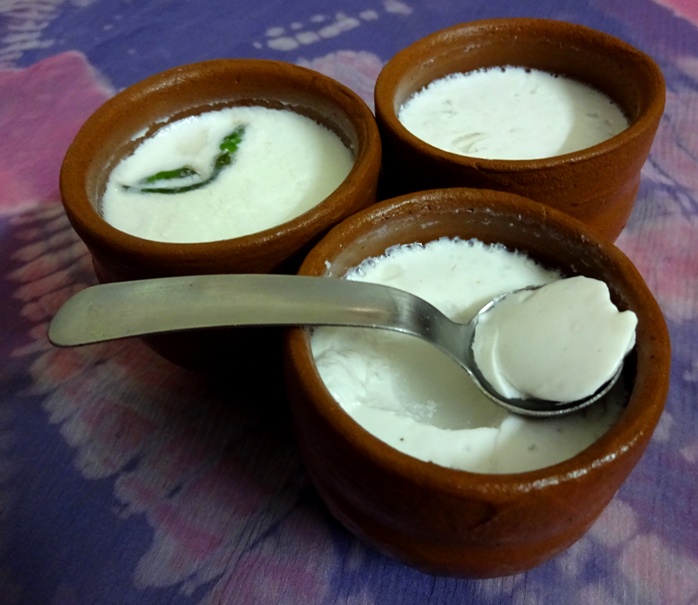 I have been on a curd-making spree ever since I went vegan in October 2014. After trying numerous recipes from vegan websites, I was eventually able to set really nice-looking peanut curd. But the problem was, no matter what I did, the curd always had a strong, nasty “peanutty” smell. Adding rice milk (as recommended by some) did help to neutralize the flavor, but it still wasn’t palatable enough for me.

Thankfully, the Vegan Curd God finally revealed the secret to me through Daisy Pruthi who runs The Vegan Oven—Gurugram.

You too wanna know? The secret lies in the method of making the milk! Now hop on to this Peanut Milk recipe and use it to make this curd. You won’t be disappointed, I promise 🙂

If you don’t have any curd starter, you can just break a couple of chilies into two pieces each and drop into the warm milk and proceed as per Step 3. The curd will still set well but will have a slight chili flavor. 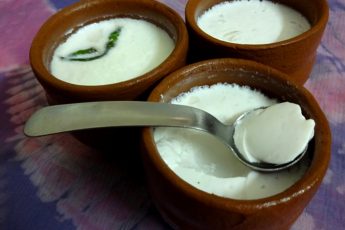 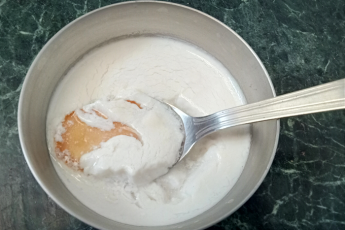 How does one make Peanut milk
How much peanuts does.one need for 600 ml

Here’s the link for making peanut milk (it’s also given in the post above)
https://ofdonkeysanddhokla.com/peanut-milk/

Hey Minal 🙂 Thank you for your sweet words! Learning new things and improvising is a constant process! I use boiled peanut milk, made this way: https://ofdonkeysanddhokla.com/peanut-milk/
I don’t even add rice. When you make milk this way, by first boiling the peanuts with salt & lemon, the peanutty smell is eliminated to a great extent.

Thanks a lot for the prompt reply and guiding us to make that ‘perfect curd’. Love you my sister.

I followed this method , I was able to get creamy peanut milk. But the curd didn’t set well. I used 1 spoon moong dal starter. There is lot of bubbles in the peanut milk ( after 12-15 hrs) but the curd is not tangy and is still creamy. Doesn’t resemble the picture. 🙁

Hi Veena! Could be a number of reasons. Please check if any applied in this case: 1. The milk was not warm enough when the starter was added. The milk should be slightly warm, but not hot. 2. Adequate quantity of starter was not added. Add more starter next time, maybe 2 tablespoons. 3. Was the milk disturbed during the setting process? 4. The milk should have the consistency of full cream cow milk. If it’s either thinner or thicker, it won’t set properly. Was this your first time? If so, don’t worry 🙂 It took me around 8-9 tries… Read more »

Got my reply from this post for the same attempt as Veena… even before my post was approved! Thanks will try again though the milk was warm enough and curd starter was about 1 tablespoon…don’t know what went wrong….

Hello Namrata! I tried making this peanut curd, but I cheated and used dairy yogurt as a starter. I think that’s why it didn’t work. I end up making a peanut buttermilk. It was really tasty and creamy! I will definitely try making this again! Thanks for the easy recipe.

Hi Arushee! So glad you liked it 🙂 Being a vegan for ethics, I wouldn’t recommend using dairy curd as a starter. Vegan curd starters are easy to make, please try one of the methods given in the link below next time. It takes a few tries to get it right, so don’t give up.
https://ofdonkeysanddhokla.com/5-types-of-homemade-vegan-curd-starters/

I was very excited to read this post on how to make my own Peanut curd but I must admit I have failed at my attempt. I m quiet unsure where I went wrong. I followed the steps described to make the peanut milk and those here but still haven’t got the curd to set at all :-(. I tried 2 different curd starter still no luck.
Does the variety of peanut matter, should the skin be removed before grinding? I am not sure where I went wrong.Can you please help me here?

Hi Meera! Yes, the variety of peanut does matter. No, we don’t need to remove the skins.

What were the two types of starters you had tried?

The temp of the milk when you mix in the starter should be warm, but not too warm.

What exactly was wrong with the end product? I’d be able to give a better answer if you tell me the exact issue. Don’t worry, we’ll work it out 🙂

Starters I tried are green chilli and moong ka pani (the overnight soaked water). Everytime the curd does not set and I end up having peanut ka chaas. And in a week’s time though kept in fridge it gets a foul smell and I have had to discard if don’t consume my chaas quick enough.

Yes, I do mix the starter when the milk is warm (and is not too warm or cold).

Hmm. I’m getting a bit confused now! The curd should have set with both broken chillies/moong Dal starter.
A few more questions:
1. Did you boil the milk & let it simmer for a few minutes? This part is important.
2. How long were the peanuts soaked? Soaking for too long affects the quality of the milk and it might not set.

Yes, it’s better to finish off the curd/chaach within 3-4 days, esp in hot weather. Otherwise it starts smelling.

Peanut Milk – Of Donkeys and Dhokla

This was so good! This is my first time making vegan curd & I’m not very comfortable with fermenting foods. This recipe was really easy to follow, and came together in 10 mins. I left it to ferment overnight and woke up to well set peanut curd.

I used they curd to make some mock meat tikka rolls- it was a hit with everyone who tried it. Thank you!

Hi Namita 🙂
Thank you for your feedback! I’m glad you liked the curd.

I was so excited Looking at your post and tried making the peanut curd exactly as you have advised but sadly even in the Gurgaon heat wave it just didn’t set and turned sour directly. Where would I have gone wrong I used non refrigerated probiotic curd as a starter and when it didn’t set overnight added chilly heads too!

Hi Ranjani! Sorry that your first attempt didn’t come out well 🙁 However, don’t lose hope. It sometimes takes a few tries to get the knack of it. What exactly did you use as a starter? A previous batch of vegan curd? or dairy curd? I’d not recommend using dairy curd as a starter. You could try one of these methods to make your own starter: https://ofdonkeysanddhokla.com/5-types-of-homemade-vegan-curd-starters/
Also, could it be that the pack of peanuts used wasn’t fresh? Sometimes older batches don’t yield goof curd.

Hi Sonam! Yes, the peanut curd does have a slight peanutty flavor even after the boiling treatment. It’s an acquired taste. Combination curds like peanut-cashew and peanut-rice taste better. You can also try cashew curd, soy-cashew curd, soy curd, or coconut curd if you are looking for peanut-free options. I personally like to use peanut combos curd for making kadhi, chaach, or raita.
Go through this post and experiment with the combos: https://ofdonkeysanddhokla.com/5-types-of-homemade-vegan-curd/

What is the nutritive value of peanut curd?

Thank you clearly explaining all the steps. The result I got was just perfect!

Hi Subha 🙂
Thanks for the feedback. Glad it turned out well!

I made peanut curd 5 days ago and kept in fridge , When I see now it tastes bitter and smells pungent . Did it get spoilt ? if yes then how many days can we store the peanut curd?

Oh! Roshni… I’m sorry it got spoilt.
I have been able to store well-set fresh peanut curd for up to 4-5 days in an airtight container in a cold portion of the fridge.
Questions:
1. How was the curd when freshly set? Was it nice and tasty back then?
2. Is your fridge cold enough?
3. Was the curd covered/airtight when stored in the fridge?

Hi Namrata, Thanks for the quick reply.
I think I missed the air tight part, rest all was fine. I did taste fresh curd it was good with slight peanut taste .
Next time I guess I need to store in an air tight container.

Oh k! Yes, next time store it in an airtight container, and it will be good for a few days 🙂
Also, keep it in the coldest part of the fridge. In my own fridge, the top shelf is the coldest, maybe coz it’s the nearest to the freezer.